Read Part 6 of Women in the Workforce: We Can Do It!, a 14-part series exploring topics related to the history, challenges, and accomplishments of working women in America.

After the war, it was expected that women would move aside and allow the men to return to their previous occupations. The government promoted the view that in peacetime, a mother’s primary duty is to be home with her children. However, not all women felt the same way, and circumstances did not allow women to move right back to their homes. Approximately 75% of women who worked during the war expected to continue their jobs after the war. Interestedly, this included high numbers of married women.

Polls showed that between 47% to 68% of married women wanted to keep working, but employers justified laying off many in favor of veterans returning from the war. The women who did choose to stay in the workforce were usually demoted and paid less. Ninety percent of women who continued to work after the war experienced a decrease in wages. A woman’s average weekly wage dropped from $50 to $37, a decline of almost 26%, compared to the overall decrease of 4% after the war.

In 1947, the Department of Labor unsuccessfully attempted to pass an equal pay amendment. Secretary of Labor Lewis Schwellenbach argued that “There is no sex difference in the food she buys or the rent she pays, there should be none in her pay envelope.” However, cultural norms persisted, and as men returned from the home front, women were expected to stay home or be paid less.

According to the Women’s Bureau studies, of the 75% of women who expected to keep their jobs after the war, 84% felt they had no other alternative and needed to support themselves and their families financially. Eight percent expressed specific reasons such as buying a home or educational expenses which would keep them in the workforce. And only 8% reported that they liked working as the reason to stay part of the labor pool. There was very little difference between the responses of married women and single women. But enlisted men had been guaranteed their jobs back, which meant that women were pushed aside. 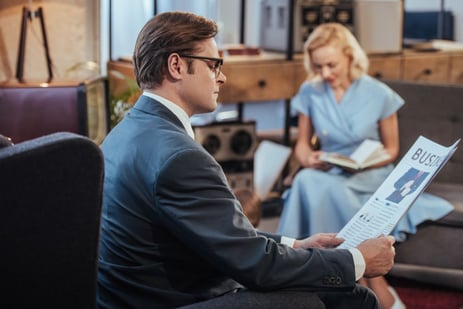 The Postwar years were a time of great economic prosperity. The middle class was growing as new jobs and opportunities increased. The GI Bill promoted homeownership, and white, middle-class Americans moved to the suburbs. The 1950s brought an increased focus on the importance of the family.

Traditional gender roles were valued, and it was a period of conformity. After the troubling times of the depression and war, people were in pursuit of the American Dream. Marriage and homeownership rates skyrocketed. Women married young and divorce was rare. The nuclear family was considered the building block to a strong society. The first Baby Boomers were born in 1946, and the idea that women were to be primarily wives and mothers prevailed.

The myth of the ideal woman was prominent in the 1950s. It was a throwback to the Victorian ideas surrounding the virtuous woman. The pants that she wore during the war years were replaced with girdles, full skirts, and unrealistic proportions. 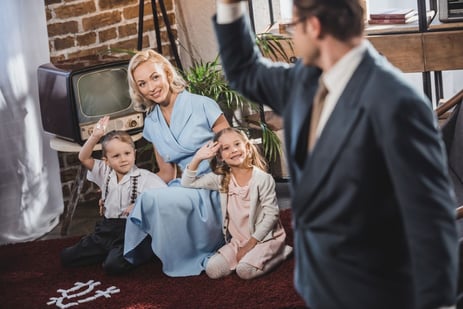 Young women dropped out of college to marry early. The M.R.S. was the most sought-after degree in college. Magazines urged women to pretend to be helpless and dumb to maintain their husband’s love. Women were isolated in the suburbs as the men left each day for their jobs in the city.

The explosive economy created opportunities like no other time in history when a young couple could marry while the husband was still in school, buy a house with no savings, have children right away, and continue to increase their standard of living, all on a single income. Middle-class women everywhere were raising children with the help of Dr. Spock and sharing casserole recipes at the neighborhood get-togethers. 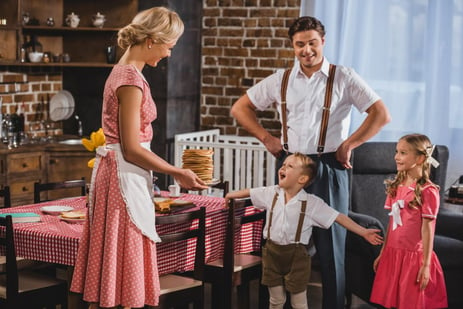 The media reinforced this image of domestic bliss. Television shows such as Leave It to Beaver and Father Knows Best praised the virtues of the perfect family: a hard-working father who provided for his family, a beautiful and adoring mother who kept a clean house and prepared wonderful meals, and mischievous children who learned life lessons in 30 minutes. These shows implied that a woman’s place was only in the home, and being a housewife held the ultimate fulfillment. June Cleaver even wore high heels and pearls while cooking dinner!

Comedian Lucille Ball perpetuated this myth in I Love Lucy. As independent and fun-loving as Lucy seemed, every time she tried to pursue an outside interest or job, she always failed in the most hysterical ways. The episode usually ends with Ricky teaching her a lesson and reminding her that she is best suited as Mrs. Ricky Ricardo. In the very first episode, Ricky states, “I want a wife who’s just a wife.”

Women’s magazines also promoted traditional gender roles. Articles focused on how to be a better wife, and advertisements targeted women as consumers by playing on her fears of not meeting the ideal domestic standards. African Americans also embraced the notion that a woman’s place is in the home, with a twist based on their traditional place in society. Ebony magazine wrote that Black women should stay in their own kitchens instead of cleaning someone else’s. This was a more powerful message than the magazines geared to white audiences, which promoted submissiveness and helplessness. It was as if women were not interested in anything except housekeeping, children, and the desire to please their husbands. Author Betty Friedan theorized that the change in journalism displayed in the 1950s was a result of women writers leaving their jobs after the war. Male writers replaced them and their ideal of domestic life was pushed.

Whether married or single, with children or not, working part-time, full-time, or even two jobs, as a stay-at-home mom or a community volunteer, American women can do it! Throughout history, American women always have. And I am so proud we do! Over the next few months, I will explore how topics about women in the workforce from the early 1900s until the present. Also, I want to note the changing trends of women in the workforce that this series contemplates will focus on white, middle-class women. Women of color have had very different experiences, and their work lives have been defined by racism, sexism, and financial necessity. I have pointed this out, when possible, but please keep in mind that this series is not a complete picture of all women. 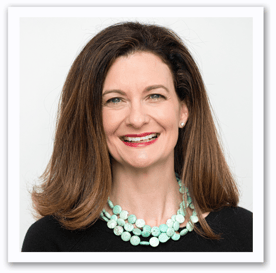 Choosing the Right Health Plan for Your Small Business 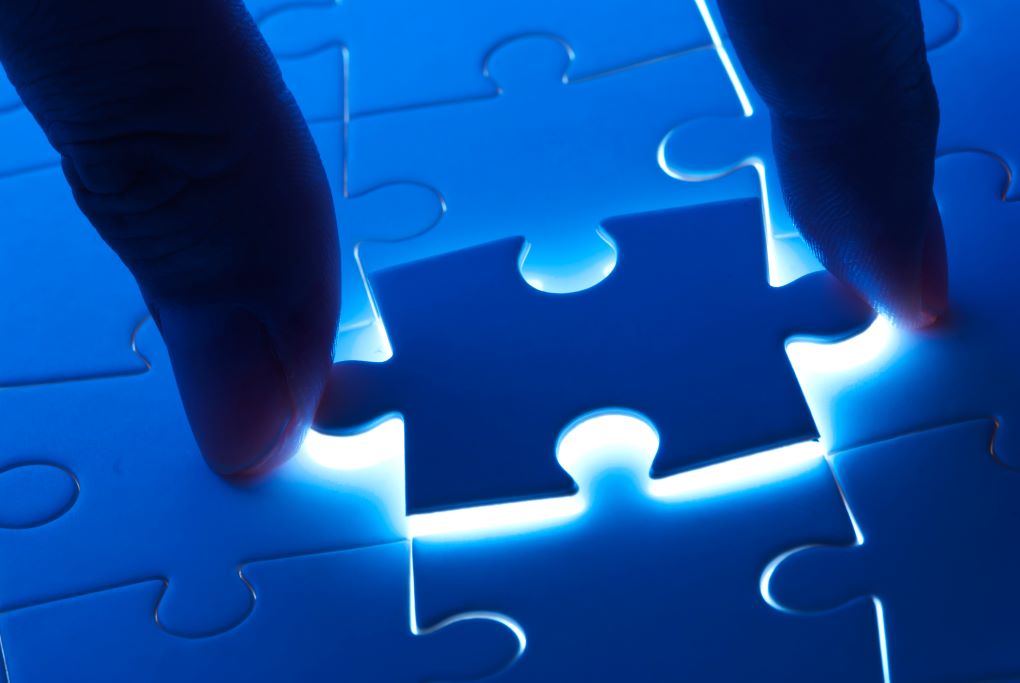 This is Part 5 of a series, Women in the Workforce: We Can Do It!, exploring topics ... END_OF_DOCUMENT_TOKEN_TO_BE_REPLACED 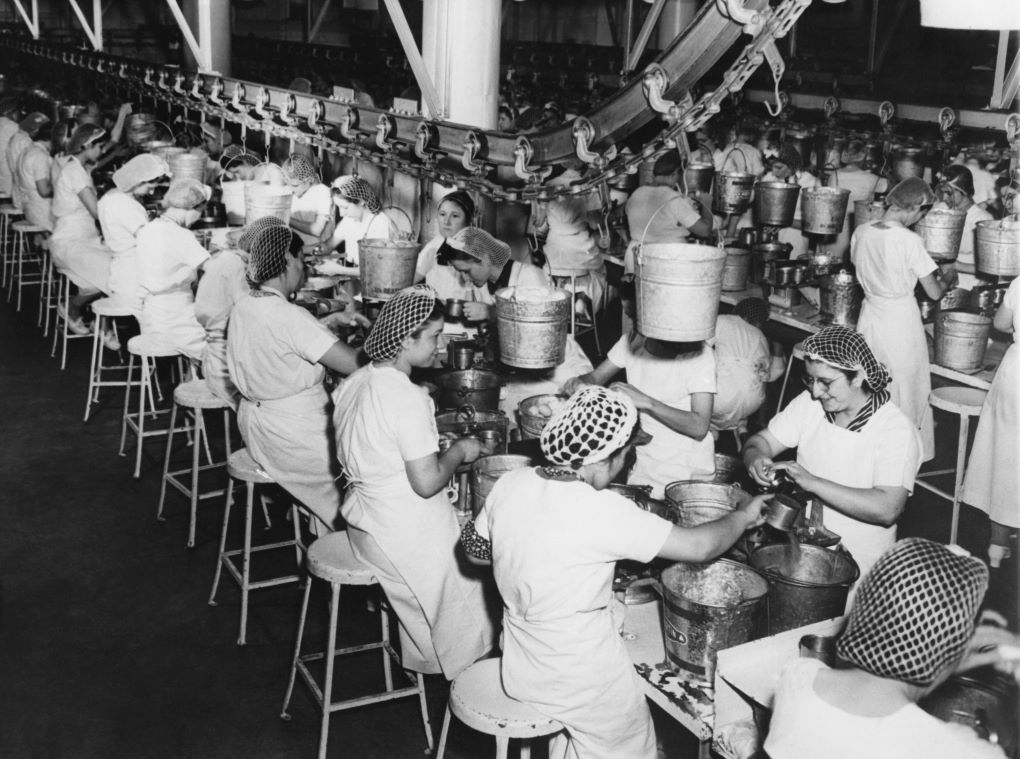 From the high costs at the pump, a lack of workers due to a severe labor shortage, and an ... END_OF_DOCUMENT_TOKEN_TO_BE_REPLACED 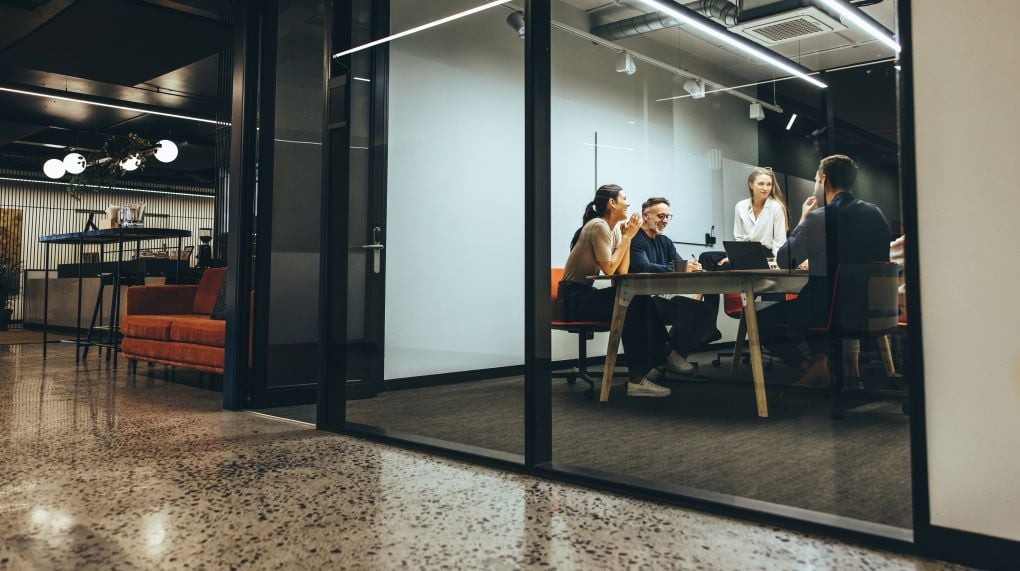